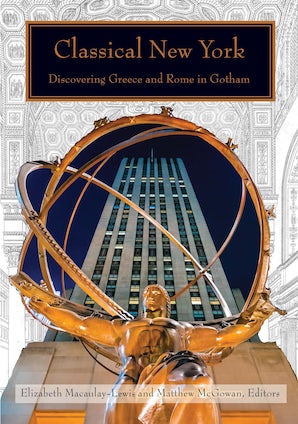 During New York’s rise to become a global metropolis, the visual language of Greek and Roman antiquity played a formative role in the development of the city’s art and architecture. Classical New York, a collection of essays on the influence of Greco-Roman thought and design on the city, touches on topics from huge, elaborate neo-classical public buildings to public art and Latin inscriptions. Join us as the editors of and a contributor to the volume discuss the enduring influence of the classical world on modern New York and, especially, on lower Manhattan.

Elizabeth Macaulay-Lewis is Assistant Professor of Liberal Studies and the Acting Executive Officer of the M.A. Program in Liberal Studies at the Graduate Center, the City University of New York.

Matthew M. McGowan is Associate Professor and Chair of Classics at Fordham University, as well as President of the New York Classical Club.

Jon Ritter is Clinical Associate Professor of Architecture at NYU. He is President of the New York chapter of the Society of Architectural Historians.

The exhibitions and programs of The Skyscraper Museum are supported by public funds from the New York City Department of Cultural Affairs in partnership with the City Council.